My boyfriend and I have a bad habit of waking up late.  Although we often sleep through the typical time range for breakfast food, we find ourselves starved for waffles, eggs, toast, and all that is delicious about brunch.

Fraiche is a cute little restaurant on Noyes St. in Evanston, and it is just down the street from the dorm we live in.  It is only open until 4PM, advertising itself as a “Breakfast and Brunch” cafe, and is a spot we like to hit up after waking up at 2PM.

Martin preparing to dig in.

The experience: Fraiche is a cute little place, with a chalkboard-menu and little flowers in the window.  Unfortunately, due to its small size, it is often crowded and we are forced to hover in order to obtain a table.  Nevertheless, the waitresses are smiley and chipper, as are the majority of patrons.  The restaurant has gigantic windows that, on sunny days, fill the dining area with light.  It’s not quite a sit-down restaurant, as there is a line to the cashier, and you pay for your food upfront; it’s similar to the style of Noodles and Company, where food is still brought to your table, but you aren’t seated from start to finish. 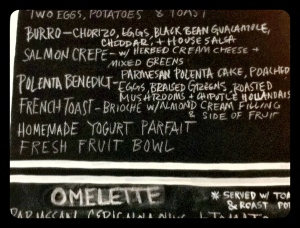 The food: Fraiche is equipped with a glass bakery-style case, as well as a full kitchen in the back.  Thus, they are able to serve sunny side up eggs and the like, which are otherwise difficult to obtain without hitting up a full service restaurant like Noyes Street Cafe or Le Peep.  While the meals themselves are quite good, the pastries can be cloying and too-sweet, as was the case of the Twix Bar we got.

My order of french toast and a side of fruit. $8. 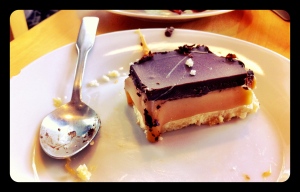 The homemade Twix bar. So much caramel!

The bill: Although Fraiche is categorized as “$” on Yelp, our total bill of two meals, one pastry, and one coffee, came to a total of $24, which I found to be a little pricey.  For this, we could have enjoyed a full-service meal at Walker Brothers, which I believe is still the best breakfast restaurant in the Chicago suburbs.  I also wasn’t sure how much to tip, due to the half-service nature of the restaurant, but opted for the usual 18%, since our waitress/cashier was so friendly.  Is there a specific percent one is expected to tip in this type of situation?  I know that Noodles and Company explicitly states that they expect no special tip.

Fresh (no pun intended) flowers in the window.

Overall: Fraiche is a cute, quaint little place.  They have big cupcakes (though a little dry, compared with More or Sprinkles), but serve as a nice place for a quick breakfast.  Get there early though, because it can get very busy very quickly!  See also: Fraiche on YELP.  815 Noyes St, Evanston IL.

2 thoughts on “Relatively fresh and chic: on Evanston’s “Fraiche””